Generally speaking, we want to avoid stresses in metallic structures. But what if having a certain type of stress brought into a component or part actually improves the structure? And it does.

Shot Peening is done to pre-stress surfaces of some metallic parts. By doing so, the fatigue strength of the part is increased and it helps to prevent stress and corrosion cracks. Nevertheless, such surfaces can still get damaged. When damage occurs, it must be removed (by blend out and/or smoothing). If still within allowable damage limits, the part must be shot-peened again (after all, the pre-stressed surface at the damaged area is removed). But what if the damaged part is installed on the aircraft and rather difficult or time-consuming to remove? Don’t worry, that’s when they call you.

Flap Peening is the Shot Peening of small areas of components or parts that are installed on the aircraft. Flap peening can be done best with the specialized tooling made by Shockform Aeronautique: The flapspeed PRO. Aircraft manufacturers demand that the person who performs the flap peening procedures is qualified and trained.

This training makes sure you become qualified for the job!

Not only will you become familiar with how the Flapspeed PRO works, you also get an extensive explanation of the Flap Peening procedure. After following this training you will fully understand the flap peening procedure given by, for example, Airbus and Boeing

After successfully completing this module, the student will be able to: 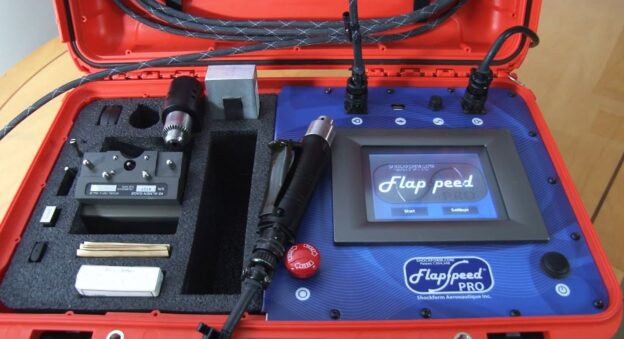 Not Enrolled
Take this Course
Included in subscription

This website uses cookies to improve your experience while you navigate through the website. Out of these cookies, the cookies that are categorized as necessary are stored on your browser as they are essential for the working of basic functionalities of the website. We also use third-party cookies that help us analyze and understand how you use this website. These cookies will be stored in your browser only with your consent. You also have the option to opt-out of these cookies. But opting out of some of these cookies may have an effect on your browsing experience.
Necessary Always Enabled
Necessary cookies are absolutely essential for the website to function properly. This category only includes cookies that ensures basic functionalities and security features of the website. These cookies do not store any personal information.
Non-necessary
Any cookies that may not be particularly necessary for the website to function and is used specifically to collect user personal data via analytics, ads, other embedded contents are termed as non-necessary cookies. It is mandatory to procure user consent prior to running these cookies on your website.
SAVE & ACCEPT